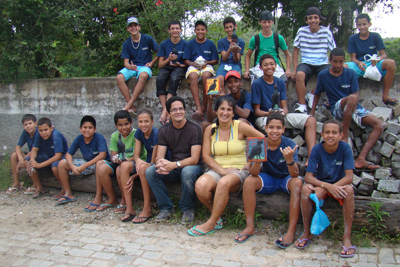 REGUA and Crax Brazil worked together for four years on the IBAMA approved reintroduction of a locally extinct bird species, the Red-billed Curassow at REGUA. This magnificent species was last seen in Rio state in 1962 and now only a few isolated populations live in both northern Espirito Santo and southern Bahia states. These are large ground dwelling birds endemic only to south-east Brazil, and though they are capable of short flights and roost in trees for protection, they would never be able to roam these forests near Rio de Janeiro, the most southern tip of their former distribution area, due to the devastation of the forests in between and the wide Paraiba de Sul river.

In spite of all the odds against a successful reintroduction which takes years in the best of situations, birds rescued by Roberto Azeredo from the front line of falling forests over 30 years ago have been successfully raised in captivity and he has already contributed birds to the CENIBRA project in Minas Gerais for their own successful reintroduction programme over the last 15 years. Christine Steiner developed her doctorate paper on the reintroduction of these cracids at REGUA with radio telemetry monitoring of introduced birds raised at Crax Brasil, a project funded by the Wetland Trust, UK. The reintroduced birds had to be of a certain size yet young enough to adapt to the new forest conditions and to fit UK tailor developed transmission back packs made by Biotrack, UK. Though REGUA still hasn’t evidence of any young chicks in spite filming adult’s copulating and evidence of nest building, but Christine successfully caught the attention of the community by informing them of the importance of these birds and was able to turn them into a flagship species for this project (photo below).

REGUA has had to reduce the momentum of this project, but having completed her study, Dr Christine was appointed a professorship in South Bahia and is now spearheading a project with BirdLife International and zoos for their continued reintroduction. Various zoos have examples of these birds in their collections but suppress their reproduction as there are few sites to reintroduce them. Christine is seeking partners, IBAMA approved sites, and coordinating a big effort to return these birds to the forest. They are an essential component of healthy forest ecology due to their seed dispersal performance. We hope Christine is successful and these birds will not take long to become a common bird as it was in the days of the early Atlantic Rainforest explorers.