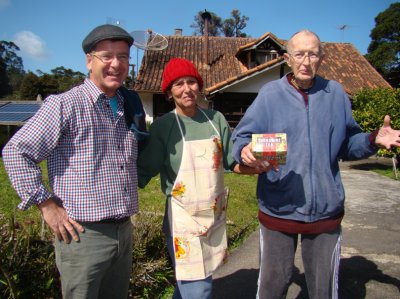 We are very saddened to report the passing away of our close friend David Miller. Over all the years we knew David, he kept his distinctive Irish humour and Brazilian passion very close to his heart. Married to Bel, and retired as an accountant, David fell in love with the cloud forests of the Atlantic Rainforest, purchasing two fabulous properties with pristine forest in the mountainous region of Nova Friburgo, better known as Macae de Cima. They dedicated their lives to the study and conservation of orchid species and brought friends from around the world to share in their studies, publishing several definitive books on the 600+ species found in the Serra dos Orgaos mountain range. David always maintained that this was the biodiversity hotspot for orchids, and he dedicated his time to travelling and unravelling the past history and show that it doesn’t take much to destroy the fine equilibrium that had taken millions of years to reach. He particularly liked the narratives of George Gardener who avidly described his extensive travels in the early 19th century. David and Bel were always present with a ready cup of tea or coffee to welcome all his guests. His hummingbird feeders were the best around and were featured in the BBC documentary Life of Birds, by David Attenborough. He will be sorely missed and we hope that his wish to transform his sanctuary into an orchid study centre will come true.