Tropical America is one of the regions on Earth with the greatest animal and botanical biodiversity. Brazil, due to its continental dimensions, is included in the roll of the top five countries with the greatest biological wealth, which includes a rich fauna of butterflies with two different aspects: the fauna of the Amazon and that of the Atlantic Forest.

With the advent of digital cameras, many citizens began to spend their leisure hours on nature walks and adventures, using these cameras to record the beauties they are observing, obviously butterflies are one of the preferred targets of these ecotourists within the group of insects. But there are so many species, that for those who are not specialists in this group (Lepidoptera), it is difficult to identify the majority of them. Unfortunately and unlike birds, the butterfly guides published in Brazil are counted on less than a handful, precisely because the number of species exceeds 4000, with around 1000 in the Atlantic Forest biome alone!

Thus, it is with great satisfaction and joy that we finally managed to publish this guide for the Serra dos Órgãos, the central mountain range of the State of Rio de Janeiro, after 4 years of exhaustive research, writing and searching for natural photos of the species included (just over 800), which encompasses almost all of those registered for the area. The book was made possible with the collaboration of more than a dozen people (amateurs and professionals, such as the late Luiz Claudio Marigo) who made their photos, data and records of butterflies in south-east Brazil available. This area encompasses 90% of the Brazilian butterfly species listed as threatened or vulnerable under the IUCN criteria, with 20% of them occurring in the Serra dos Órgãos.

Unfortunately, in order to make a minimum of 500 copies, we had to choose the English language to cover a potential larger audience that could find some use in the book. Even though a bilingual edition was originally considered, it was later found that printing costs, sales price, etc. would be excessively high, and our aim has always been to provide an extremely accessible identification tool for the general public.

Orders worldwide can be made from NHBS. Orders within the the UK may also be placed direct with co-author Alan Martin (please send a cheque payable to the ‘Brazilian Atlantic Rainforest Trust’ with your name and address to Alan Martin, Alureds Oast, Northiam, East Sussex, TN31 6JJ, England).

Back in 2015 Alan Martin and Jorge Bizarro started work on a guide to butterflies to accompany the three REGUA books already published that are specific to the REGUA area (hawkmoths, dragonflies and birds). What started as a three year project has taken five years, partly because the number of species recorded in the area is more than had been anticipated but also because it proved very difficult to source photos of some of the rarer species.

The book is now about to be printed and it covers 803 species (excluding grass skippers) with descriptions, comparisons to similar species, global distribution and notes on the ecology, behaviour and host plants. All but three of the species are illustrated with over 1,300 photos of live specimens or where not available, photos of pinned specimens. There are also introductory texts for each family, subfamily and tribe.

The book will be distributed by NHBS, but in the UK is best ordered from Alan Martin at a reduced price of £30 plus £5 postage (please see our Publications page for details). All the profits from the sale of the book will go to REGUA.

Robert Locke is visiting us at REGUA and we know how he enjoys taking photographs of butterflies, an interest that he has enjoyed for many years. Two species he found and photographed recently are Paulogramma pygas (previously Callicore) also known as the Pygas eighty-eight, and Dynamine postverta also known as the Four-spot Sailor.

Both are beautiful butterfly species and both male and female will be featured in a new book currently being prepared on the Butterflies of the Serra dos Órgãos, the surrounding mountain range to REGUA and one of the most biodiverse regions of Brazil. The Serra dos Órgãos mountains range is a biodiversity hotspot and REGUA is considered to be a very well preserved and protected area within this range.

As REGUA continues to increase the area under our protection, creating corridors for wildlife and strengthening the range of trees planted, we are securing the future for all its inhabitants. These two wonderful species of butterfly are part of the beauty to be found here.

Should you like to visit REGUA and take photographs that could be featured in the Butterflies of the Serra dos Órgãos publication, we would be very happy to receive you!

Adrian Hoskins, on his website Learn about Butterflies (Amazonia section) describes the family Carea as being some of the most beautiful butterflies on the planet and indeed coming across this individual, I could not believe the iridescent green on the thorax and wings. These butterflies are stated to be restless and once they take off are difficult to follow in surrounding undergrowth which perfectly confirms Jorge’s experience of the butterfly he saw at REGUA.

As Jorge and Alan Martin are writing the book on Butterflies found at REGUA and the Serra dos Órgãos region, this photograph could well be included. Should you have photos of butterflies seen here at the reserve, please feel free to email them to us as we would love to see them. For contact details click here.

Work on the next REGUA field guide, A Guide to the Butteflies of the Serra dos Orgaos, South-eastern Brazil, is progressing at good pace, and with it lots of new knowledge about the local butterfly fauna, together with some novelties, new records from guests, and volunteers and visitor’s photographs have been consistently pouring in.

One notable rarity was found by Duncan McGeough, a volunteer from Germany in October 2013, just 30 metres from the REGUA office. Ortilia polinella (A. Hall, 1928), a crescent butterfly, is a cousin of the Glanville Fritillary Melitaea cinxia from Europe. Known from less than a half-dozen localities in the Brazilian states of Minas Gerais, Rio de Janeiro and Espírito Santo, and also very seldom found in collections (only three females and six males in the Natural History Museum, London) this was a superb find!

The photo depicts a worn female sun basking, probably in between short exploratory flights to find a suitable plant for ovipositing. Adults are mainly forest species that dwell in sunlit areas like trails, clearings, forest edges, etc. It’s biology is unknown, but other species in the genus use Justicia spp. as foodplants (Acanthaceae).

Duncan has also helped with the creation of the REGUA moth leaflet that guests can pick up at the lodge, featuring 60 common moths easily spotted at the moth wall.

One of REGUA’s objectives is to encourage a wider interest and knowledge of the incredible biodiversity of the Serra dos Orgaos. REGUA has already published three books covering Hawkmoths (2011), Dragonflies and Damselflies (2015) and Birds (2015).

Now Jorge Bizarro and Alan Martin are working on a 4th book covering the Butterflies of the Serra dos Órgãos. This is a mammoth task and will cover about 500 species, of which we have so far written the text for Papilionidae (28 species), Pieridae (36 species) and are now working on Riodinidae.

Each species text will include a description, notes on similar species, distribution and ecology plus of course photographs where available. An example is shown below.

We are still missing good photographs of many of the species that will be covered in the book, so we would welcome any photographs of butterflies taken at or near REGUA which should be sent to Alan Martin at alanjmart@gmail.com. It may take another year to complete the texts, so there is still plenty of opportunity to take those pictures, and of course every picture will be acknowledged if used.

In the recently published field guide on the odonata of REGUA, A Guide to the Dragonflies and Damselflies of the Serra dos Orgaos, the scientific name of the Blue-wedged Dancer is given as Argia claussenii. Rosser Garrison pointed out that this in fact is A. croceipennis, therefore we have amended our Odonata list. We are indebted to Rosser for sharing drawings and scans of both species with us that support his view.

The appendages of these two species are quite similar and there are also considerable similarities in colour pattern. However, under the microscope the difference in the shape of the cerci (placement of ventral tooth) can be clearly seen.

In the field there are luckily also a few differences that help identify the species. Argia claussenii has clear wings, whereas those of A. croceipennis are amber colored, and A. claussenii has an occipital bar, whereas A. croceipennis does not. These characteristics are very much in line with the species occurring in fast flowing and rocky streams in the foothills of REGUA. Below are examples of both species, kindly made available by Rosser.

The field guide A Guide to the Dragonflies and Damselflies of the Serra dos Orgaos, South-eastern Brazil is available for sale at the lodge and online. See the publications page for details.

Orders from other countries should be sent directly to Tom Kompier at kompierintokyo@yahoo.com. Copies will also be available from the REGUA stand at the British Birdfair on 21st – 23rd August at Rutland.

Tom Kompier’s excellent new book A Guide to the Dragonflies and Damselflies of the Serra dos Orgaos is now available in the UK from Alan Martin. This book describes all 204 species known from the REGUA area and is illustrated with 560 photos.

Please send a cheque for £30.50 which includes postage and packing, made out to the ‘Brazilian Atlantic Rainforest Trust’ with your name and address to Alan at Alureds Oast, Northiam, East Sussex TN31 6JJ.

Orders from other countries should be sent directly to Tom Kompier at kompierintokyo@yahoo.com. 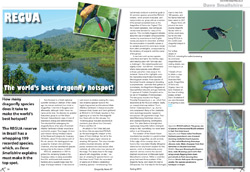 With 204 species of dragonfly and damselfy now identified at REGUA, the Reserve is a strong contender for having the highest odonata diversity of any site on Earth.

In the spring issue of Dragonfly News, the magazine of the British Dragonfly Society, Dave Smallshire writes about the highlights of a recent dragonfly tour to REGUA that saw the group finding 42 species at the wetland in the first three hours on their first day, and an amazing 166 species during the two week trip, including several rarities!

Dragonfly News is available in the UK to British Dragonfly Society members. Details on how to join and get a hold of the article can be found on their website.

We are thrilled to be able to announce the imminent publication of our new REGUA publications book A Guide to the Dragonflies and Damselflies of the Serra dos Orgaos.

The book has been written by Tom Kompier and describes all of the 204 known species from REGUA and its surroundings. Illustrated with 560 photos and an additional 125 plates, we think this is a milestone in the study and observation of this stunning group of insects.

Publication is due in April. For pre-orders or additional information, please contact Tom Kompier directly at kompierintokyo@yahoo.com.

World Land Trust council member and The Times columnist, Simon Barnes, describes his recent visit to REGUA in a piece in The Times this week – It’s not Rio but it is a carnival of the animals. Download

In August 2007, Peter Hughes from the British newspaper the Telegraph visited REGUA to find out more about the project and to see for himself all the hard work we are doing. To read the article, Reassembling Eden, click here.

Simon Barnes from the Times and John Burton from the World Land Trust visited REGUA to report on something positive happening to rainforest. To read the article Good news from the forest by Simon Barnes click here.