One of our most valued and long-serving members of staff, Lisa is currently in hospital.

Those who have visited REGUA and stayed at the lodge will know Lisa as our main cook and housekeeper, preparing lovely meals for our guests and looking after the lodge.

The medical staff at Rio hospital have had to make the difficult decision to amputate both legs, so Lisa will have a slow recovery and have great changes to adapt to.

Lisa is a strong woman, who is dealing with this situation very positively. Her family are being tremendously supportive and her REGUA ‘family’ are helping with visits and practical assistance.

Everyone at REGUA sends her our love and best wishes and we look forward to her return.

One of the most rewarding parts of REGUA’s work is being able to bring real change to the local community. Two people have really changed the future for their family, by using the skills they have used and enhanced whilst working for the project.

Sandra Aparecida started working at REGUA before the lodge was built, and started off looking after the first researchers who stayed at Casa Pesquisa (House of Research). Sandra then worked with Raquel Locke, building a range of dishes which were based on the local recipes. For over a decade Sandra worked with the team of ladies at the lodge preparing delicious meals for our guests. Today, she is running a family restaurant in the local village of Matumbo with her husband.

Jossué Ouverney Heringer joined the project in 2002, and worked as REGUA’s driver and handyman. Using the skills he honed from maintaining the lodge, conservation centre and keeping REGUA’s vehicles on the road, he has built a shop in Matumbo, and set up a motorbike repair shop which also sells drinks, and snacks made by Jossue’s wife.

REGUA would like to thank both Sandra and Jossué for all their hard work and commitment and wish them both great success in their new ventures.

Raquel’s birthday was celebrated at the REGUA conservation centre surrounded by the team, with a cake and a candle that was a challenge to blow out! Yet another year dedicated to family and the REGUA project and we all hope that Raquel maintains her patient, warm and friendly energy to help us advance into other year of conservation at the project.

Adilei, Eduardo “Tiriba” and I, took Keith and Hein, visiting REGUA and anxious to see a few high elevation species to strike them off their list, on an excursion to Macaé de Cima. Those who have been with us to David and Bel’s sanctuary will be accustomed to the hummers that visit the feeders in their garden. The Brazilian Ruby, White-throated Hummingbird, Amthyst Woodstar and Scale-throated Hermit were in full motion at the feeders, as these wintery mornings indicate few flowers are around.

Bel was most kind and hospitable, and soon found us pointing our binoculars to the mountain ridge to look for the Swallow-tailed Cotinga feeding on a fruit tree. Without the telescope there was no alternative but to walk up and try to see it closer up and we found one of David’s old orchid trails and set off. Within a few minutes we came across three ultra rare Buffy-tufted-ear Marmoset Calithirix aurita feeding foraging, jumping form tree to tree startling a pair of Mottle-cheeked Tyrannulets. The marmosets brown sheen to their fur and dark facial patterns distinguish them from the more common White-tufted-ear Marmoset Calithris jachus. Soon we cut off the trail, scaring off a Black-and-gold Cotinga to see their Swallow-tailed cousins feeding together with Shear-tailed Grey Tyrants on the fruit tree.

Adilei called his famous owl imitation and within seconds we were joined by a pair of angry Diademed Tanagers furious with the mysterious owl’s presence. Walking back to the trail a pair of Rufous-tailed Antthrushes were seen on the path scouring for food. We walked down to thank and say goodbye to Bel to leave the calling Hooded Berryeaters, Bare-throated Bellbirds and White-rimmed Warblers to find Adilei had just accidentally scared off a Slaty Bristlefront which we were not able to see even though it was calling not six feet from us in the cover of the undergrowth.

Suddenly a Mouse-coloured Tapaculo set up its continuous calling but although we hadn’t seen this extraordinary bird we decided it was time to search for the White-bearded Antshrike. We couldn’t find one at first, disturbing Maroon-bellied Parakeets and then a Surucua Trogon, so we took the car down the road and continued playing the tape walking rather absent mindedly as we had not eaten lunch. Suddenly Eduardo got a response and after a short search in the tangled undergrowth around us the bird shot out to dive bomb and dart into undergrowth the other side of the road. A male White-bearded Antshrike with its soft call is not a very small bird so after a while we had superb views and were able to take some poor images to register this rare sighting. Aside this bird, the Rufous-crowned Greenlet and an Eared Pygmy-Tyrant showed up to our delight.

Before a freshly made sandwich and a welcoming beer, we still stopped to find many Red-eyed Thornbirds bouncing in the undergrowth, all very excited that someone had taped them and drawing their attention. After lunch we still wanted to see the bristlefront but alas we only found a Yellow-throated Woodpecker and soaring high in the afternoon air, a Black-and-white Hawk-Eagle.

The drive back saw us stop for some red flowering Erythrina speciosa trees and a large flock of tanagers were busy passing through feeding up their last of the day. Green-headed, Rufous-headed, Red-necked and Ruby-crowned Tanagers, Chestnut-crowned Becards together with Chestnut-vented Conebills all chirping loudly and pushing past each other and we had fun calling out their names in pure appreciation. Luckily a Sombre Hummingbird settled on some flowers, a good glimpse at this dark green and grey lustre with its little white ear patch. A Black-throated Grosbeak called but wouldn’t show so we left for REGUA, thoroughly happy with another great day of birding.

Adilei is always ready for a scoop. Adilei is very careful in action not to step on a twig or russle a few leaves that would diminish his chance of a good photo. Just the raising of his binoculars he received from Betty Peterson who runs the American Birding Association Birders Exchange programme is an art of slow motion and with a bit of luck we all get to see what he has seen with his extraordinary vision. He was birding this week with Eduardo Gelli, a young enthusiastic Brazilian birder on holiday from University and he took this photograph of Adilei on the prowl on the moment of taking yet another photograph to add to the news section.

Coordinating a lodge and a conservation project it is always hard to get away. Rick and Elis Simpson have invited us several times to visit the area of Ubatuba and they have done much to put that area on the map (see Ubatuba Birdwatching Centre). We had heard that the Brown-backed Parrotlets were seen recently and as visitor to REGUA Steve Brookes wanted to see them, and Adilei wanted a short break to see other birds, and volunteers Stefan Lithner and Erico de Fonso wanted to see other habitats, and finally our Helen Cavilla was ending her term as lodge volunteer helping with managing the guests at REGUA, so at the end of November we all set off for a marvellous three day tour. We passed Pereque where we saw a male and female Black-hooded Antwren Formicivora erythronotos, a Streak-capped Antwren Terenura maculate, building a nest on the side of the road and a Spot-backed Antshrike Hypoedaleus guttatus, always a hard bird to see calling in the tree above. We passed Paraty and stayed in a small hotel in Ubatuba to move out and look for Rick. Unfortunately Rick wasn’t there and neither were the parrotlets, but we saw some great tanagers and the gorgeous Swallow-tailed Kite Elanoides Forficatus being mobbed, almost this bird’s most southern occurrence and recently been seen at REGUA. Rick fortunately found us at the end of the day and we returned to bird a fabulous place with hundreds of hummingbirds, a place called Sitio de Jonas. We were all ecstatic seeing the Festive Coquette Lophornis chalybeus and the truly fabulous Versicoloured Emerald Amazilia versicolor.

Back the next day early we went to a lowland forest with Rick and Elis to find the Squamate Antbird Myrmeciza squamosal and came across the Spotted Bamboowren Psilorhamphus Guttatus though its tail seems to have gone. We had come to look for the fabulous Buff-throated Purpletuft Lodopleura pipra and it didn’t take Elis five minutes to find one for us. A final unsuccessful return for the Brown-backed Parrotlets though we found the Rufous-winged Antwren Herpsilochmus refimarginatus and we had to go home, tired, happy and grateful for the company of the great birding pair, Rick and Elis Simpson. Adilei had seen new birds, Steve has promises of a return visit and Helen had tears in her eyes just at the thought of leaving.

It is quite interesting to reflect that in this region, some 300 km south of REGUA, the birds have changed habits. Those high altitude species are found in coastal regions. Could it be the lowland forest is better conserved, but where are the Hooded Berryeaters, the Black-and gold-Cotingas, or is it that the Atlantic rainforest has two clearly defined distribution zones. These need careful visits and further studies. Want to come with us the next time?

We now have a new minibus! A Renault with 16 seats, air conditioning, plenty of luggage space and a high roof to allow birders carrying scopes, tripods, cameras and bags easier access, we can now offer guests more comfortable transportation to and from the airport and on excursions. Our driver Alcenir is over the moon! 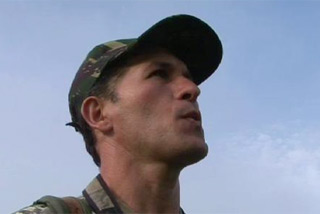 Bruce Gilchrist, artist and joint founder of London Fieldworks, spent time at REGUA in 2009 as part of a British Council Artist Links residency hosted by REGUA, and recorded this video of our bird guide Adilei and his amazing mimicry skills.

Click here to watck him at work. Adilei mimics six bird species – can you identify them?

REGUA is delighted to announce the appointment of Jorge Bizarro in a new post as Research Co-ordinator. Jorge has a degree in medicine from Lisbon, an MD and PhD in Biological Sciences from Parana and has worked in medical research as well as teaching human palaeontology and bioethics. His main interests are in entomology, especially the relationship between Lepidoptera and their host species, and has published a number of papers and collaborated in the preparation of several books on the subject. Amongst other things, Jorge will be responsible for co-ordinating the growing number of research projects at REGUA, working with the Brazilian Universities and Institutions to promote and obtain funding for further research and to assist in the dissemination of information through the website, publications and journals. This is a part-time role, and Jorge will spend his remaining two days per week studying for a Post Doc in Rio. In its brief history to date, REGUA has developed an enviable bird list and some notable mammal records, but Jorge’s appointment will help focus more attention on the many other taxonomic groups which abound in the forest.